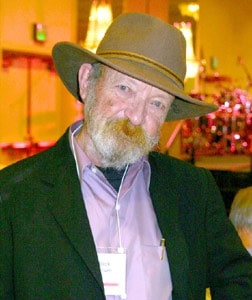 The following is used by permission, from Dick Oakes’ International Folkdance Resources website:

Richard George “Dick” Crum was born in the United States on December 8, 1928, of German-Irish extraction and was raised in a Romanian neighborhood in St. Paul, Minnesota, where he attended Romanian school at the Romanian church. He was the oldest of five children. At an early age, he played with Romanian-speaking youngsters, attended language classes with them, and won their respect as someone interested in learning their dances and culture, as did his sister, Lois. Dick and Lois also went to the St. Louis, Missouri, Folk Dance Festival and traveled to Hibbing and Chisholm, Minnesota, for Serbian Days. When their parents lived in St. Petersburg, Florida, for a few years, their mom, Florence (Fee Fee) Crum taught folk dancing in a group there.

Dick started folk dancing in September, 1947, at a group meeting at the International Institute of St. Paul, Minnesota, whose instructor was Morry Gelman. There he also saw Gordon Engler dancing. He also attended the University Folk Dancers at the University of Minnesota in Minneapolis. There, is instructors were Morry Gelman and Dr. Ralph Piper. Morry also was the instructor at another Minneapolis session that Dick attended, the YMCA International Folk Dance Group. At the YMCA in 1950, he participated in a special kolo session led by Michael Herman of New York City.

He eventually was a teacher at an Arthur Murray studio. From 1950, he was with the Duquesne University Tamburitzans for many years, first as a dancer, then as choreographer and technical adviser. During Thanksgiving weekend in 1951, he attended the first annual Kolo Festival in New York City, sponsored by the Folk Dance House (founded by Michael and Mary Ann Herman). Dick was the program director of the Festival of Nations at St. Paul, Minnesota, in 1952 where he mastered dance dialects of many styles of international dance. He also was a choreographer and consultant for the AMAN Folk Ensemble (aka, AMAN International Music and Dance Company). He moved to Los Angeles, California, in 1972.

Dick was a perennial favorite teacher among folk dancers beginning in 1951. He made seven research trips to the Balkan countries, doing field work and formal research with many different groups and from village dancers to exhibition ensemble choreographers.

He taught Balkan dance at all the major folk dance camps in the United States and Canada and for innumerable master classes at colleges and universities. Not only was he a folk dance specialist and authority on Balkan dance, but published a collection of Yugoslav folk songs for recorder and voice.

Ethnographic
Recording dances as they are danced by native dancers, studying dances in their natural context.

Choreographic
Presenting dances on stage, involving esthetics and dance adaptation for the stage and for non-dancing audiences.

For years, Dick was an editor for a foreign language translation service agency in Los Angeles, California. In addition to English, Dick spoke Bulgarian, Macedonian, Serbo-Croatian, Slovenian, Spanish, and Romanian, and had a working knowledge of Brazilian, Chinese, German, Hungarian, Indonesian, Italian, Polish, Portuguese, Russian, Swedish, and several other languages. He even knew Old Church Slavonic—all 1,300 surviving words of that now unspoken language.

Dick served as a panelist at a convening of the National Endowment for the Arts entitled “Vernacular Dance in America,” which looked at the informal structures that support dance activity.

In 1999, the board of the East European Folklife Center (EEFC) recognized Dick Crum with a certificate for his lifetime of service to Balkan music and dance and his contribution to understanding of cultures. The National Folk Organization (NFO) honored Dick at their May 2002 Annual Conference in Rocklin, California. In a booklet produced by NFO president, Vonnie Brown, “A Tribute to Dick Crum,” Dick is quoted, “It is our responsibility to be well informed about the material we are handling. The steps are only one dimension. It is vital we consider the dance within its cultural context.” Vonnie also included a portion of an ongoing poem about Dick that begins, “Dick, you scaled the mountain without a stop; you stuck to your dream and reached the top. You cast your spell and made your mark; you are the master and our patriarch!” She also included a list of more than 190 dances that Dick had taught (see below), some “Crums of Wisdom,” that included “You could spend your life trying to be Bulgarian, but you’d never make it. No way!” In another booklet, “Crum Table Trivia,” produced at the same time, Vonnie wrote a 15-question “Crumisms Quiz.”

Some of Dick’s “Crumisms” are:

Ed Ableson of New York recalls that Dick was doing Orijent (a dance he had choreographed for the Duquesne University Tamburitzans) when another dancer—obviously not knowing who he was—suggested that “if he didn’t know the dance, he should go to the end of the line or follow behind!” Jon Spratt says that Dick told them that he had joined a group called “procrastinators”; they would meet as soon as they get around to it. Wally Washington of Texas relates that Dick was teaching a dance that was to be done flat-footed so he was saying “flat, flat, flat, flat” to encourage the dancers to do the steps flat-footed; when they were to go backwards, Dick cued “go back, talf, talf, talf, talf.” Yves Moreau says, “There is no doubt that I based a lot of my teaching techniques and methods on Dick’s style, and took it as a great compliment and honor when people would compare me to him.” John Filcich had this poignant comment at the L.A Tamburitza Extravaganza in September of 2005: “Aren’t we all glad that Lady Luck sent Dick Crum our way!”

For all his seriousness about folklore, however, Dick was not beyond humor. At times he would wear a vest with “Colorful Ethnic Native” on the back. A workshop he gave titled “From Folklore to Fakelore”‘ was a hilarious, hands-and feet-on demonstration of how true folk dance “evolves” from village amusement to some unrecognizable balletic enterprise suitable for touring and tourists. Maybe the epitome of Dick’s humorous bent can be found in the Hungarian Waltz Quadrille, in collaboration with Gordon Engler, which originally appeared in a spoof edition of Mary Ann Herman’s Maine Folk Dance Camp daily newsletter, the Pioneer Press, in 1962. Dick and Gordon wrote take-offs on every section of the Pioneer Press, then substituted their own mimeographed versions for the originals that everyone found at their tables at breakfast! Dick also was known for interjecting humor into his dance instruction. The following is attributed to Dick’s quick wit:

Dick was also leader of the “Ethnic Police,” complete with helmet, badge, and whistle given to him by his groupies in Minnesota at the Memorial Day Folkdance Retreat in May of 1979. He also used fictional characters in his teaching, such as “Harald J. Underfoot” (Ethnic Choreologist doing a statistical comparative analysis on the Serbian kolo and exploding squares, known to lurk and eavesdrop) and “Doris Ding-Dong.”

Dick consulted for and supervised many fine recordings of ethnic dance music on the Folk Dancer, Xopo, and Du-Tam labels, which are available from your local folk dance recording outlet.

Among Dick’s publications, articles, record syllabi, and workshop syllabi are:

Dick was last seen at selected folk dance conferences, principally in a Master-of-Ceremonies role. He died at home on December 12, 2005, at the age of 77, and his ashes were interred in a family space in St. Paul, Minnesota. He is missed by all.

Nick Jordanoff’s family were special friends of Dick. Nick sent an e-mail that reads in part: “It’s been a long time since we met in California—light years ago. As you could imagine, the death of Dick [Crum] was devastating to me since we had been so close all of our lives. From the time he came to Pittsburgh he basically ‘lived’ at our home, picking my mother’s brain on all things Bulgarian until the time of his death. The interesting thing about that time was that I had made a donation to my wife’s children chorus for a scholarship in the name of great teachers that I had in my life—and that was Dick. I had sent him an e-mail to him apologizing for this and I know how humble he was about this sort of thing. This happened in November and I did not get a reply from him, so I sent several more e-mails and I received no response. This was very unusual, since we made contact at least once a week via e-mail. Whenever he would come East, he would stop for a day and it would end up close to a week. I can not tell you what a loss this was to me personally and to my wife and to my three sons, Nick, Iliya, and Greg. They just could not believe that ‘Uncle Dick from out of town’ had passed away.”

The UCLA Ethnomusicology Archive received part of Dick Crum’s personal phonograph collection in 2007. This collection consists of more than 1,300 commercially produced phonograph recordings (LPs, 78s, 45s) primarily from Eastern Europe. Many of these albums are no longer in print, or are difficult to purchase. The items are not online; you must visit the contributing institution to view them. The collection materials are in English, Croatian, Bulgarian, Serbian, and Greek.