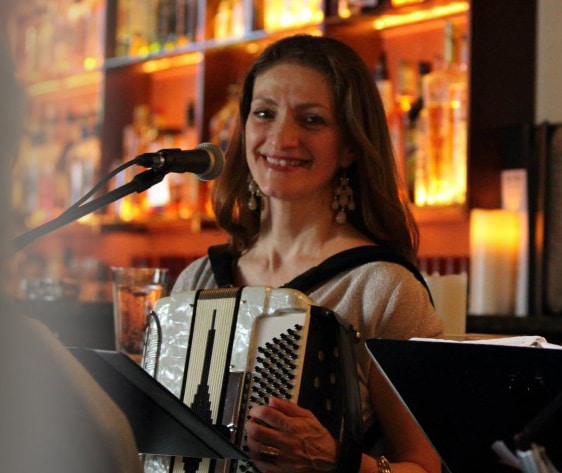 Sandy Theodorou is a vocalist, accordion, and laouto player who specializes in traditional Greek regional music and Greek urban rebetika. She was born in Pireas, Greece, and her family roots are from Epiros and Kefalonia. Sandy is a core member of the traditional Greek music band Revma, the Rebetiko (Greek blues) band Rebetoparea, and Oinos, playing laika of the 50’s and 60’s as well as the compositions of Makis Emmanoulides. She has performed with several Boston-based Greek musicians and bands including Beth Bahia Cohen, Mal Barsamian, Rebetiki Compania, Synavlis, and Ta Dilina, and has accompanied Greek artists Manos Koutsaggelidis and Diamantis Dionisiou, and New York-based artist Grigoris Maninakis. She has accompanied live dance performances for the award winning Hellas dance group of North Carolina. Sandy has performed as a dancer with the Boston Lykeion Ellinidon and served as chairperson of its Traditional Greek Music Department. She was recently nominated for Best Sound Designer by the New Hampshire Theatre Awards for her design and performance of music for the theatrical production of Seamus Heaney’s The Burial At Thebes.

For the Friday night serenade, Sandy will present music in the Smyrnaiko tradition, along with a touch of Thracian and island music, accompanied by Rohan Gregory on violin, Fabio Pirozzolo on percussion, and Mark Pattison on tzoura & guitar. We would love for you to use the lyrics provided to sing along! See the Resources & Materials tab on this page.