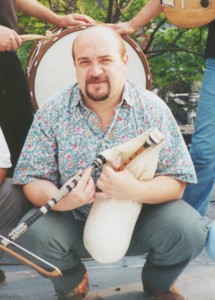 Vassil Bebelekov was born in the town of Devin in the Rhodope Mountains of Bulgaria. At the age of 11, he joined the bagpipe ensemble Sto Kaba Gaidi. He was a graduate of both the folk music school at Shiroka Luka and the Plovdiv Folk Music Conservatory. Vassil performed with many groups including Ansambul Trakia, Philipopolis, and the National Radio Sofia and Radio Plovdiv ensembles.

After moving to the United States, he taught at the University of California at Los Angeles and toured throughout the U.S. with many groups including Bulgarika, Grupa Maistori, Trio Zulum, and many others. He also became a devoted community member and became a 32nd-degree Scottish Rite Mason and York Rite Knights Templar in the Valley of San Jose.

As a teacher with the East European Folklife Center’s workshops, Vassil taught Thracian and Rhodope bagpipes and bitov (Bulgarian village) ensemble, at the same time cultivating a broad range of musicians playing Bulgarian traditional music. He was a deep well of knowledge and inspiration to his students and to all who were fortunate enough to hear his music and experience his great soul. He loved teaching music, especially to newcomers. His encouragement and humor created scores of students eager for his lessons.

Vassil passed away on July 31, 2016, at Lark in the Morning Music Camp in the Mendocino Woodlands. He is survived by his widow, Maria, and daughter, Kostadinka (Didi). He was preceded in death by his son, Jivko, in 2005.