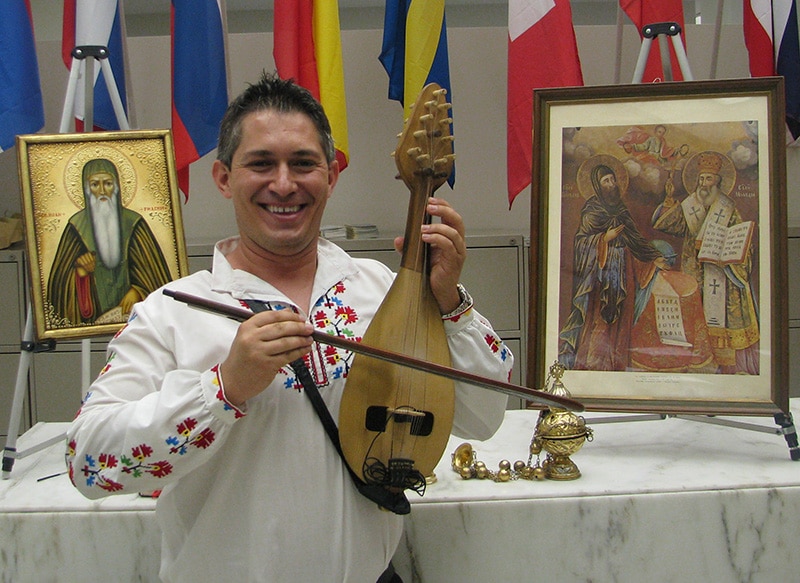 Angel Dobrev was born in the town of Omurtag in Bulgaria. He plays the gudulka (Bulgarian: гъдулка), which is a traditional Bulgarian bowed stringed instrument. He expressed an interest in Bulgarian folk music from an early age, and started taking private gudulka lessons at age 8. His interest and love for Bulgarian folk music deepened even more and led him to pursue a musical education. Angel graduated from of the famous Folk-Art Music School “Philip Kutev” in Kotel, and later earned his Masters Degree specializing in gudulka and folk ensemble conducting from the Academy for Music and Dance Arts in Plovdiv. Angel was a soloist and performer with the of the Academy Folk Orchestra during his studies. He also earned first place at a gudulka playing competition. Angel has performed with ensembles and groups at various international folk Festivals in Greece, Italy, Moldova, Macedonia, Turkey, and at the International Folk Festival in Branson, MO.

Since 2001 Angel has lived in Chicago, where he is very happy to help keep the heritage of Bulgarian folk music alive. In the United States, he plays at various Bulgarian cultural events, Bulgarian schools, Balkan music festivals, restaurants, and private events. He performs with the “Balkanski Ritmi” band, and participates annually in the Chicago Spring Festival organized by Balkanski Igri. There he performs and also teaches gudulka to people who are interested in and enthusiastic about learning to play this distinctive stringed instrument.