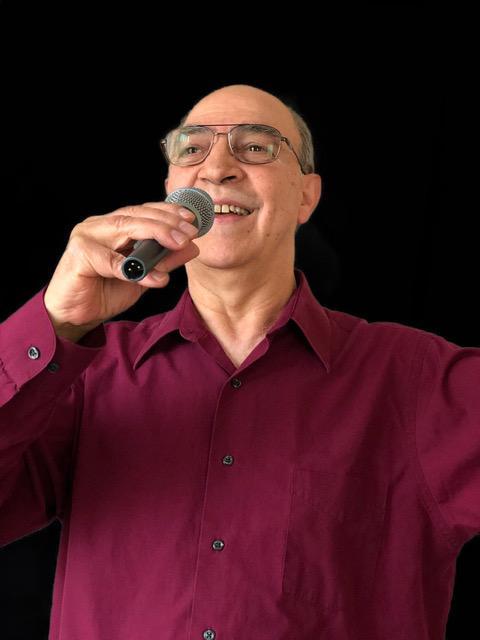 Dragi Spasovski learned to sing from his mother, whose sweet voice was the backdrop to his boyhood in Skopje. Her repertoire seemed limitless and her love of singing infused his life. Beginning in 1969 he recorded around 150 traditional, city and čalgija songs with Radio Skopje.

Dragi was a member of the Orce Nikolov Folk Dance Ensemble for many years, and in the early 70s he lived in Seattle and was a member of Koleda Folk Ensemble. In 2002 he returned to Seattle, where he has been a guest vocalist with Balkan Cabaret. He is active in a variety of musical venues, including Songs & Stories, New Land Choir and Cyril and Methodius Day.

In 1966, encouraged by his mother, Rajna Spasovska, who was already recording for the Macedonian National Radio, he made his first attempt at professional singing. He had a trial recording with Radio Skopje’s Izvoren Orkestar. At the first rehearsal with the orchestra, his life was totally changed. Here’s how he tells the story:

“The guys were rehearsing Čučuk and in a corner I was dancing for my own pleasure. At some point Pece Atanasovski saw me dancing and asked me, ‘Who do you dance with?,’ meaning, ‘Which dancing group do you belong to?’ That same evening he took me to a rehearsal with the Orce Nikolov group, and from then on my life was not the same. I danced and sang with the group many years. It was with them that I had my first chance to see and explore the rest of the world, to see places and meet people of different cultures.”

On one tour with the group, Dragi met some Americans, singers and dancers of the Koleda group from Seattle. In 1970 he joined them in Seattle and lived there six years.

In 1976 he went to Skopje and recorded intensively with all three radio orchestras. Singing became a very important part of his life. This was the period when he did most of his radio recordings, eventually completing over 100 songs for the National Radio of Macedonia.

Due to family reasons, Dragi had to retire from the folk music scene at the peak of his career. He did not resume singing professionally until he returned to Seattle for good in 2002. Since that time he has performed with many bands, including Dragi Mitev, Goran Alački, Stefče Stojkovski, David Bilides, Balkan Cabaret, and various other musicians associated with the EEFC. In 2007 Dragi completed a 3-CD and book project produced by Izvor Music, working with Goran Alački, Stefče Stojkovski and David Bilides. He currrently is working on a series of podcasts with David Bilides.

You can find Dragi’s first CD at Izvormusic.com, and listen to sound clips there.

Most of the songs Dragi has recorded he learned from his mother, “songs which were inside of me since I was a child, songs which I shared with myself and others when I was happy and when I was sad. The song was, is, and will be a description of me, a picture of my soul.” The general editor of the Folk Department of Radio Skopje, in one of the programs featuring Dragi, said, “Dragi Spasovski did not find singing a main source of his existence, rather for him it was a cultural exchange.” To which Dragi adds, “Singing is the voice of my soul.”