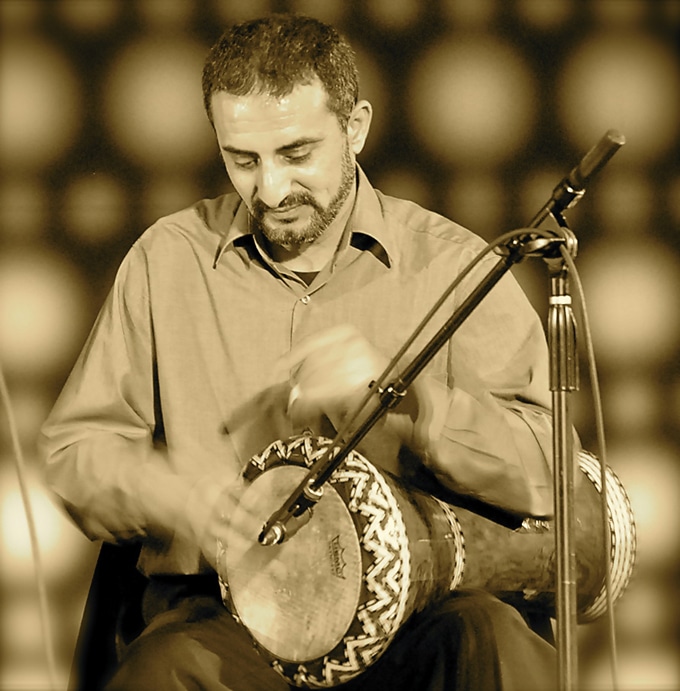 Born in Beirut, Lebanon, and raised in Oum Dbaib, Syria, Faisal Zedan grew up impassioned with the derbekki drum. At the age of 15, he embarked on a journey of learning through exposure to a wide repertoire of Arabic classical and contemporary music. A great love for drumming and years of practice resulted in his mastery of Arabic percussion instruments including derbekki, dahullah, riq and def (Arabic/Turkish frame drum).

Arriving in California in 1992, Faisal met UCLA’s noted ethnomusicology professor Dr‭. ‬Ali Jihad Racy and, at his invitation, joined the acclaimed UCLA Near East Music Ensemble. This was the beginning of a national and international musical career dedicated to the transformative power of rhythm. Faisal is currently based in the San Francisco Bay Area, and works regularly as a performer, collaborator, and teacher.

Faisal’s playing embodies the elements essential to Arabic drumming‭ combined with a deep understanding of complex Arabic musical structures‭. ‬From the classical Muwashahat and Adwar style, to folkloric traditions‭, to belly dance, Faisal is studied and nuanced in his solo, ensemble, and accompaniment playing. As a master percussionist, Faisal studies and performs various Arabic styles of music and drumming, from Moroccan to Iraqi, including music of the Arab peninsula and Yemen. He is well-versed and adept in Middle Eastern and Eastern European musical traditions, moving fluently between Turkish, Armenian, Persian, Afghan, Balkan, and Greek rhythms. Faisal’s unique approach to percussion is strongly rooted in the fundamentals of technique and cadence, with dexterity for incorporating a contemporary feel and creating new, nuanced compositions.