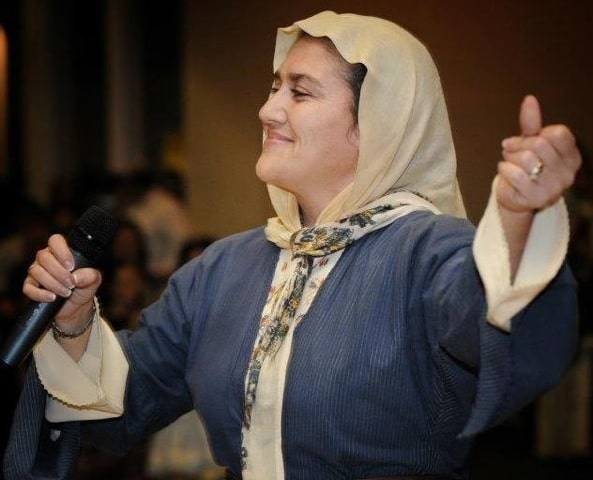 Irene Karavokiros was born in Pittsburgh, PA, where she was first introduced to the sounds of her Greek heritage, and where she performed her first solo at the local festival at the age of five.

Both of her parents were from the island of Kálymnos, where they returned when she was nine, and where Irene continued to sing at her schools’ celebrations and cultural festivities, until they moved back to the United States to Tarpon Springs, FL. There Irene was immediately recruited by the local and nationally known folk dance troupe Levendia,  with whom she not only sang, but also danced in performances all over the country, including in Miami, Detroit, Norfolk, Washington, DC, Chicago, and Pittsburgh.

After moving back to Kálymnos to have a family of her own (three daughters and two sons), Irene eventually returned to Tarpon Springs, where she is still active in the preservation of Greek Island songs, especially those of the Dodecanese Islands. She instructed the local dance troupe on how to include singing in their performances, which contributed significantly to their recognition and achievement upon receiving the Superior and Outstanding Awards of the Hellenic Dance Festival (HDF) of the Metropolis of Atlanta, for three consecutive entries. In 2009 she founded the Levendia Choral Group and competed at the 2010 HDF choral competition in Orlando, where the chorus earned the Superior Award upon their first entry.

In 2010 Irene taught a series of Greek folk song workshops for the Tarpon Springs Cultural Treasures, of the City of Tarpon Springs. She has participated in many of their concerts with themes such as rebetika (the “Greek blues”) and xenitiá, songs of the Greek Diaspora. This project has produced a CD, entitled Traditional Music and Songs from Kálymnos, with musicians Michalis Kappas (violin) from Kálymnos, and Panayiotis (Paddy) League (laouto), originally from Tarpon Springs. Listen to clips of the trio: