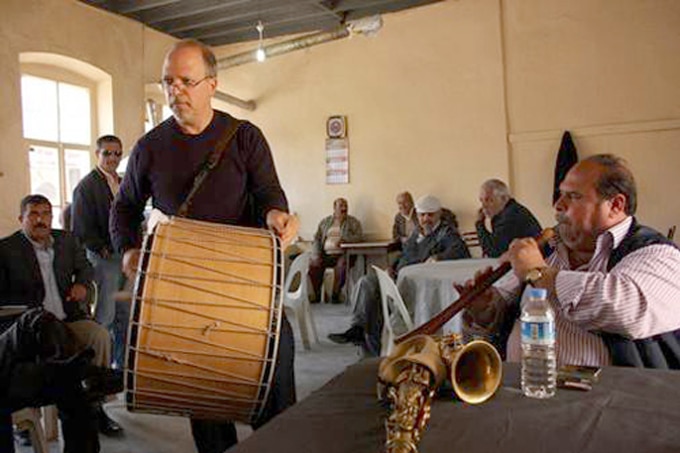 Jerry Kisslinger has played tapan/daouli for Balkan and folk-dance community events, concerts, and festivals throughout the United States for many decades and has taught regularly at EEFC camps and other workshops since the mid-1980s. He is proud to be called a dancer’s drummer. Jerry is a founding member of Zlatne Uste Balkan Brass Band, and currently plays with ZU and Kavala Brass Band as well as Pontic Firebird. He has performed with other top Balkan groups, including the Yuri Yunakov Orchestra, Akshambelah (with Christos Govetas and Ruth Hunter), the Macedonian roots band Odglasi, Turli Tava, Pece Atanasovski, and the pioneering New York Balkan band The Balkanizers. Jerry’s discography includes Édessa and Friends: Balkan Border Music, and Di Shikere Kapelye, with Frank London’s Klezmer Brass All Stars, as well as four recordings with Zlatne Uste: Golden Lips (Global Village) No Strings Attached (Rounder Records); In the Center of the Village; and Do Zore (Until Dawn; and guest appearances on Raif Hyseni 24 and Dolunay’s Our House.

Read a profile of Jerry in Kef Times.

Watch Jerry in this video