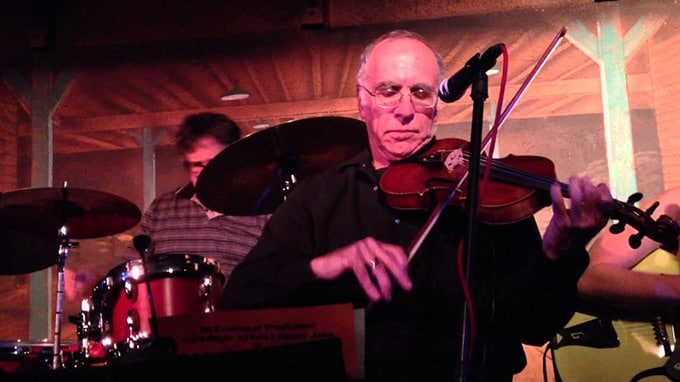 In 1970, Miamon Miller stumbled into a Balkan music class at UCLA where he was an undergraduate. As a sort of class culmination exercise, the musicians played their limited repertoire at the Museum Folk Dance Café in Pasadena. In the intervening 45 years since those tentative first notes, he has become a fixture in Eastern European folk music. In the 70s and early 80s he was a musician with and later directed the Aman Folk Ensemble. During that period and subsequently, he played with many other groups including Pitu Guli, Bucovina Klezmer, Fuge Imaginea and Trei Arcuşi, to name just a few. Miamon was involved in the early days of the EEFC’s Balkan Music & Dance Workshops, teaching the first Romanian folk violin classes and the Trans-Carpathian ensemble at both Mendocino and East Coast workshops. He’s led bands at Kolo Festival, Stockton and Balkanalia!, and has played at numerous folk dance camps and folk festivals from coast to coast.

Miamon is also involved in more mainstream music and has recorded with Neil(s) Sedaka and Diamond as well as other well-known artists. He has composed and arranged music for film and television in projects as diverse as Dr. Quinn, Medicine Woman; Starring Pancho Villa; to Arabs in Detroit; and Keeping Up With the Steins, and additionally for legitimate theater with Blackbirds of Bialystok, which premiered in that Polish city in April 2012.

Whether playing with mariachi or klezmer bands, Middle Eastern music or jazz, he approaches all styles with near-equal enthusiasm. Academically, he has an M.A. in ethnomusicology (UCLA) and studied Transylvanian folk music for a year in Romania on a Fulbright grant.

For books and recordings: www.fugeimaginea.com

Get information regarding his new group, www.garlicband.com.