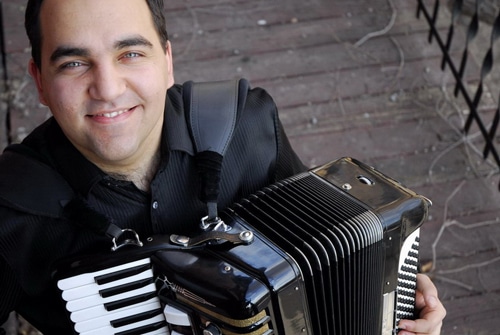 Sergiu Popa was born in Chişinau, Moldova. From a young age, he studied traditional folk and Roma (Gypsy) styles with his father, Ion Popa, himself a well-recognized Romani accordionist in Moldova. Over many years of playing alongside his father at weddings, he also became familiar with Jewish, Turkish, Russian, Serbian, and Bulgarian styles. After studying at the Conservatory of Moldova and moving to Montreal in 2002, Sergiu immersed himself into Middle Eastern, North-African, jazz, and Latin traditions, developing a remarkable ability to switch and blend seamlessly the different styles, adding a fresh perspective and inspired improvisations to every performance. He has performed with many of the great names in Eastern European and Balkan music, such as Dan Armeanca, Carmen Piculeaţă, Fanfare Ciocărlia, Vadim Kolpakov, and Petar Ralchev.