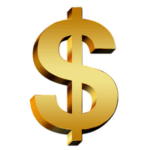 Note: this information is extracted from last year’s 2018 annual report and presented here for convenience. 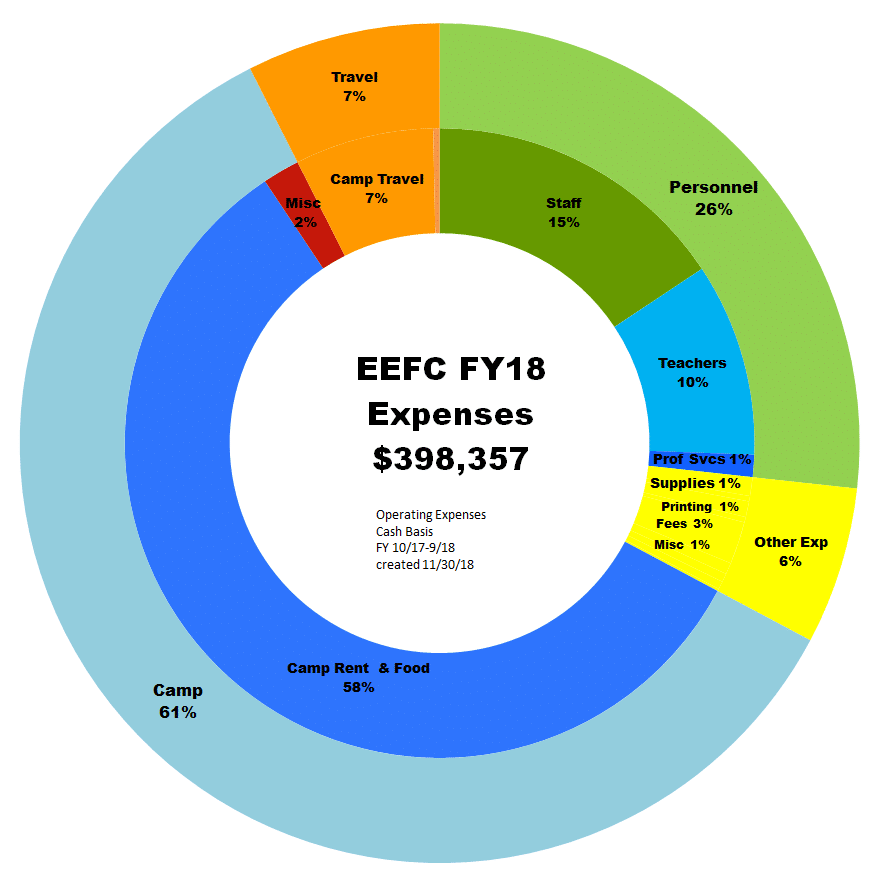 The EEFC fiscal 2017 year ended in September. These charts summarize the EEFC’s FY17 operating income and expenses.  Scholarship donations and other restricted income are not included. 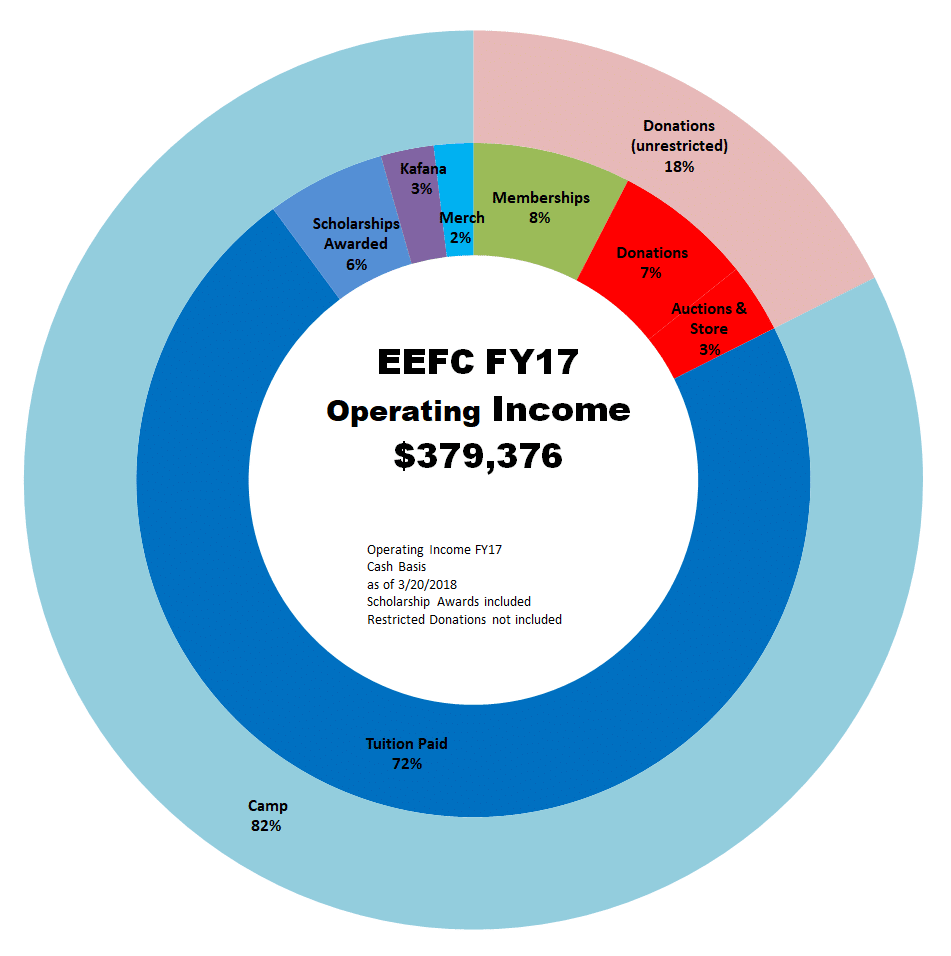 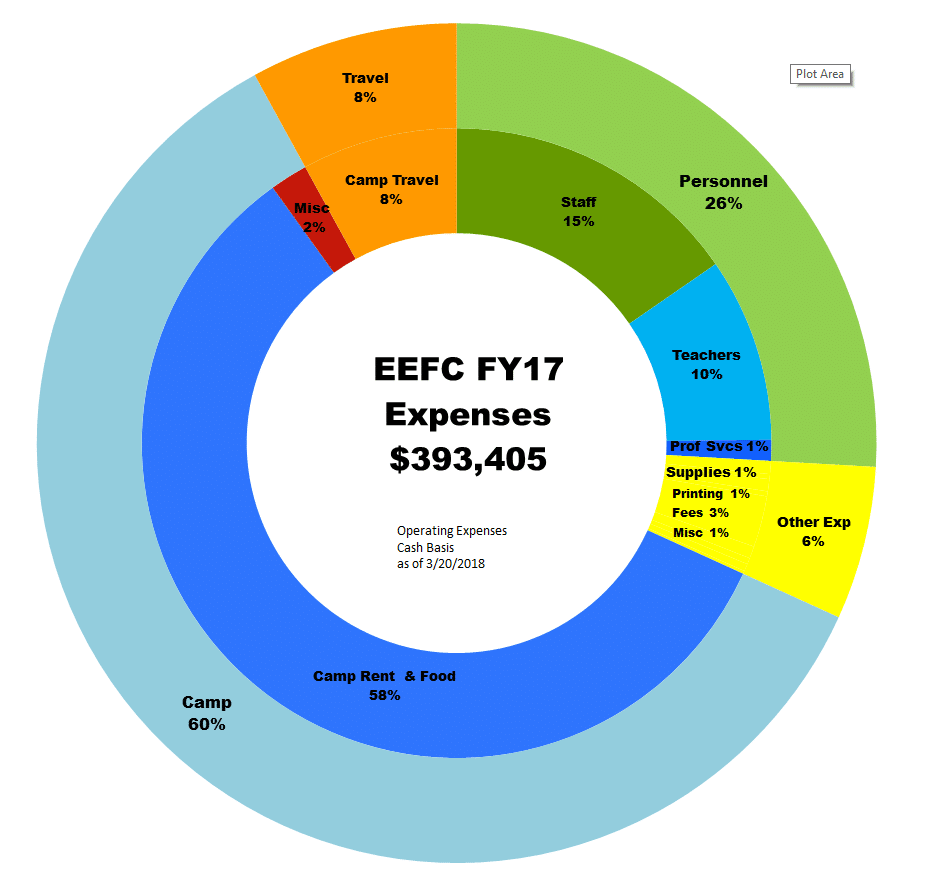 The EEFC closed our 2016 fiscal year in September. These charts summarize the EEFC’s FY16 operating income and expenses.  Scholarship donations and other restricted income are not included. 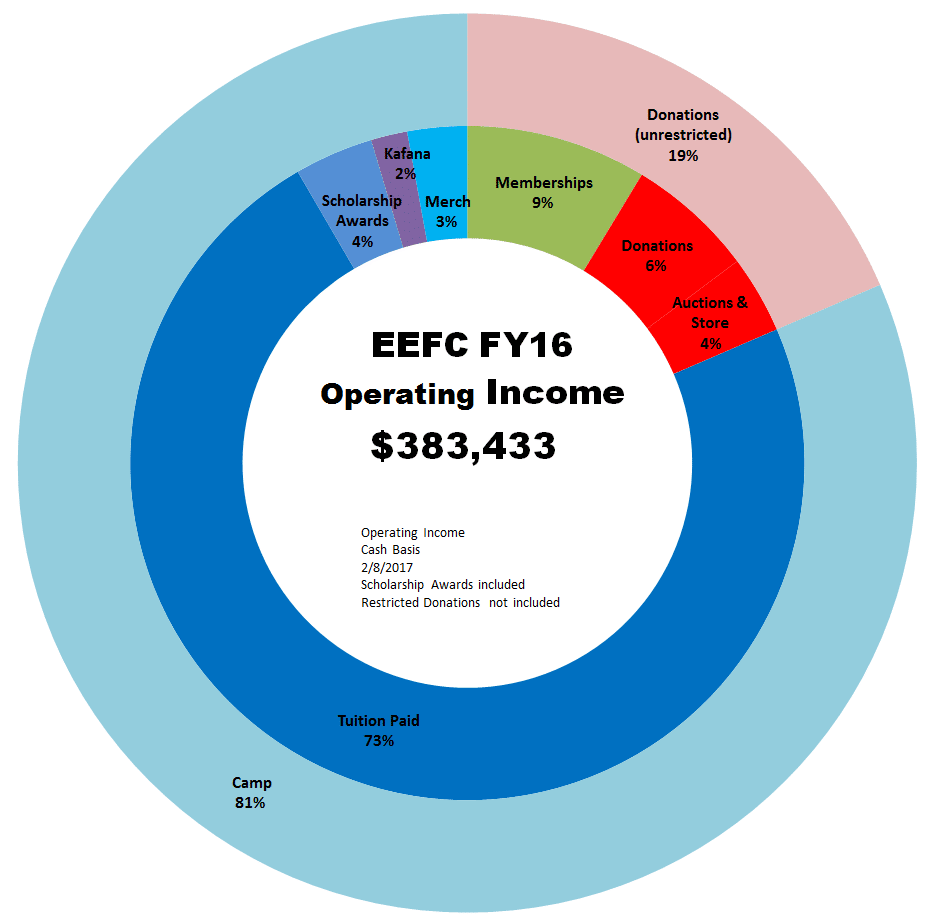 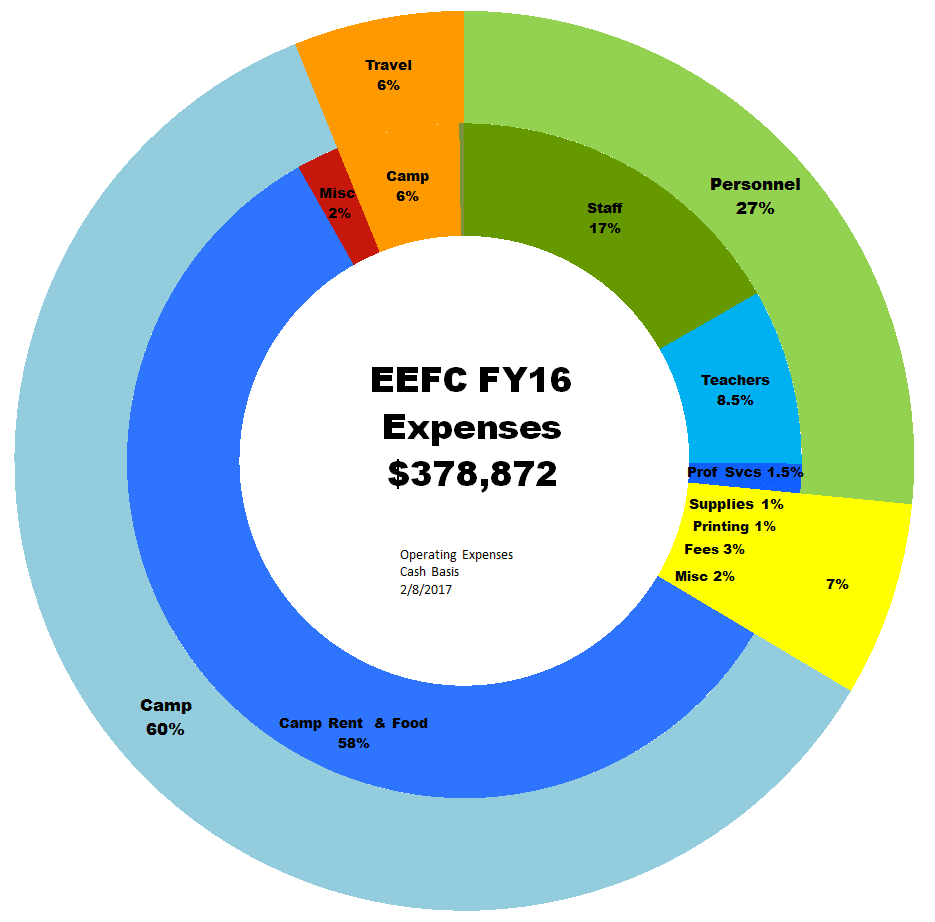 The board met Oct 21 and 22, 2016 in New York City. Corinna, Barbara, Noel, Amy, and Rachel in the room were joined by Elena and new board member Melinda Russial via video conference.  Demetri was not feeling well and was unable to attend.  Thanks to PriceWaterhouseCoopers for donating the airy and well-appointed meeting space convenient to public transportation.

We are thrilled to welcome Melinda Russial to the board.  The meeting was very productive and covered a lot of ground in slightly less than 2 days.

Elena Erber reported that the marketing committee has been meeting regularly, updating the website and posting to social media. The last newsletter was published in June, and a fall newsletter is in the works.  The committee would like to recruit volunteers and get administrative help. Over the next year their big goal is to engage staff to “project manage” marketing, with assistance from volunteers. Elena reported on the committee’s activities and plans in the following areas: Social Media, E-News, Advertising, Promotional materials, Fall fundraising mailing, Merchandise, and onsite promotion (Golden Festival, etc).

Rachel MacFarlane (general manager) reported on east and west coast camps.  Advertising started a little earlier this year than last.  Registration was robust at both workshops.  “Next Generation” meetings at both camps laid groundwork to more inclusion of under-40 folks.  Iroquois Springs (IS/East) camp provided an ideal space to mourn the loss of Vassil Bebelekov, a great musician, friend  and EEFC community stalwart. IS featured several talented Greek-Americans involved with their traditional folk culture, while Mendocino (West) was graced by an outstanding band of Chalgija musicians from Macedonia. The board plans to continue and expand conversations and relationships with advisors from various communities and regions. The board encourages EEFC committees and the community to continue and expand outreach – especially to ethnic communities from the Balkans, and to young people.

Treasurer Barbara Uhlemann, took us through the EEFC’s finances over the course of both days.  We are in very good shape. FY’16 Financial Reports show operating income was slightly larger than expenses, so we ended FY ’16 fully in the black.  Memberships plus donations (excluding scholarships) this year exceeded $55K, a record high.  Scholarship and Nest Egg contributions were over $23K, for total $78K giving. The board decided to consolidate the “Nest Egg” and “Lifetime Membership” funds into a single restricted fund dubbed the endowment fund which totals approx. $100K.  The original purpose of these funds was to generate interest income for operations while retaining the principal, however CDs no longer return 5%. We reviewed investment strategies available for this combined fund and decided to invest it in a mix of no-load equity and bond index funds. The board agreed on a guideline to expend up to 5% of the endowment per year on a case by case basis. The board agreed to shift some scholarship money from Crum/Kef fund to Cocek Nation. The board adopted a budget for FY17.

The program committee reviewed feedback from both camps, including camper evaluations and the “next generation” meetings. There are always lots of good suggestions, and criticisms. The program committee will work with teachers to get more information about classes and instructors, with the goal of posting more detailed class descriptions online. Other suggestions included more free time, more free spaces and jam opportunities, and a kids kafana acoustic space at Mendo. The committee is looking for ways to support mentors and young leaders in our camps, to create contexts for people to connect, and ways to engage new campers.

Amy Mills reported on The development committee. Linnea Mandel joined the committee last spring. A spring outreach drive contacted 170 people who hadn’t renewed memberships from 2015. We raised a record $20K in scholarships this year.  Membership goal was exceeded at 144%, general unrestricted donations were lower at 73%. The committee has reached out to some potential large donors. Linnea tried bringing the west coast donation store to east coast. The committee has a number of regular fundraising activities planned and initiatives to try out over the coming year.

Corinna and the administration committee are thrilled that Melinda Russial joined the board.  The committee will revisit and reinvigorate our recruitment efforts.  The committee confirms that EEFC bylaws, dated 5/23/2016, were unanimously adopted by the board. These bylaws reflect the EEFC’s current structure and board procedures. We will publish them on the EEFC website and THEY are currently shared here. The board discussed committee chairs and agreed on some goals and responsibilities we would like all committee chairs to take on.

Noel reported that the tech committee has imported all historical data into Salesforce and expects to have the system ready to replace FileMaker in early January.

The EEFC closed our 2015 fiscal year in September. These charts summarize the EEFC’s FY15 operating income and expenses.  Scholarship donations and other restricted income are not included. Click on either graphic to see it full size. 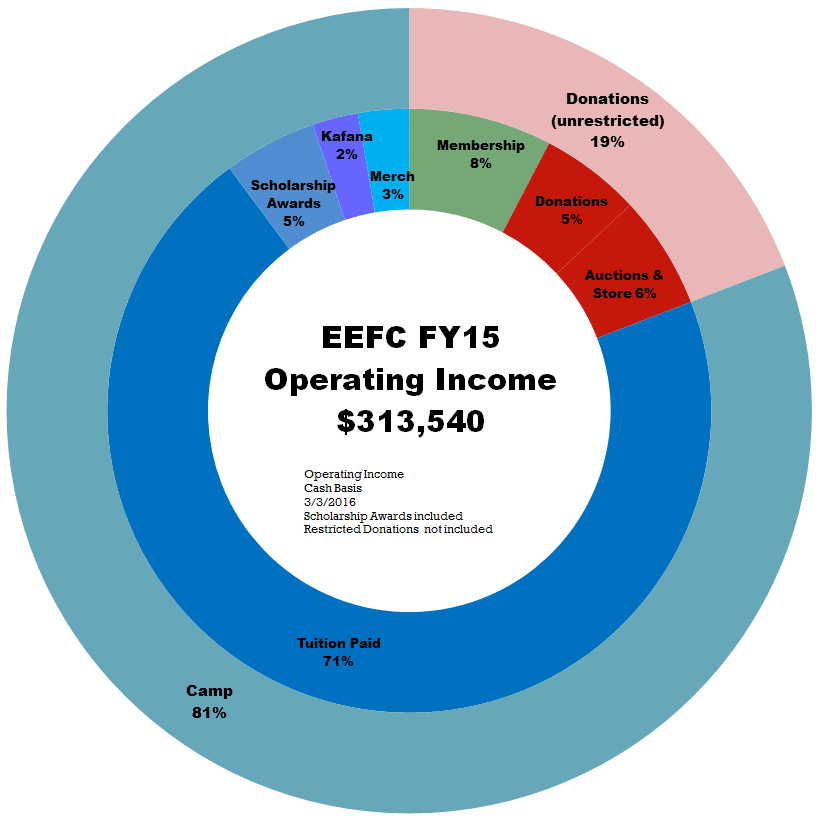 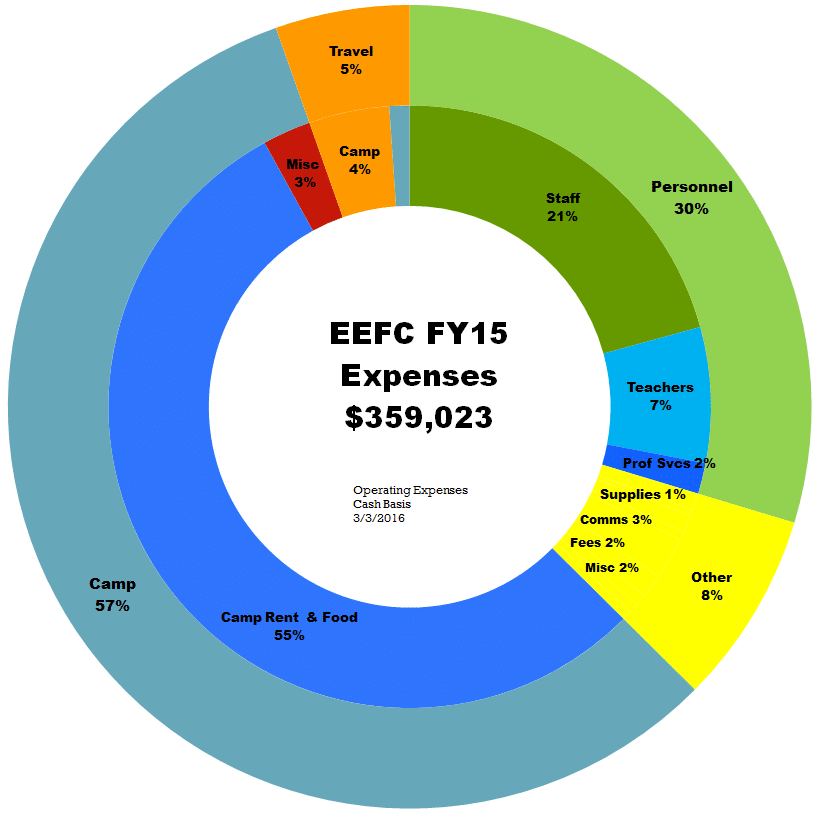 Our FY15 operating deficit was $45,483. About $35,000 of that was due to very low enrollment at both camps. We ended FY15 with assets of roughly $160,000 compared with $167,000 in FY14, thanks to a number of large donations. We recorded very generous scholarship and nest egg donations of approx $44,000 – restricted income that is not included in the operating budget until it is awarded.  Donations largely offset our operating loss, so our assets (funds on hand on Sept 30, 2015) declined by only $7K year over year.

Prior year FY2014 charts are here. FY2010-2013 charts are here. Inner rings have more detailed categories, outer rings are summary categories.  Inner ring colors are intended for comparison with prior charts. Changes in categories are a result of changes in EEFC’s budgeting and accounting procedures. Questions or suggestions can be emailed to the board liaison at board@eefc.org.

The EEFC completed our 2015 fiscal year in September.  Our financial results for 2015 are not yet ready for publication. We will work to post them soon, hopefully within the next few months. We have been very slow to post Income & Expense graphs from FY 2014, here they are, below. Click on either graphic to see it full size…. 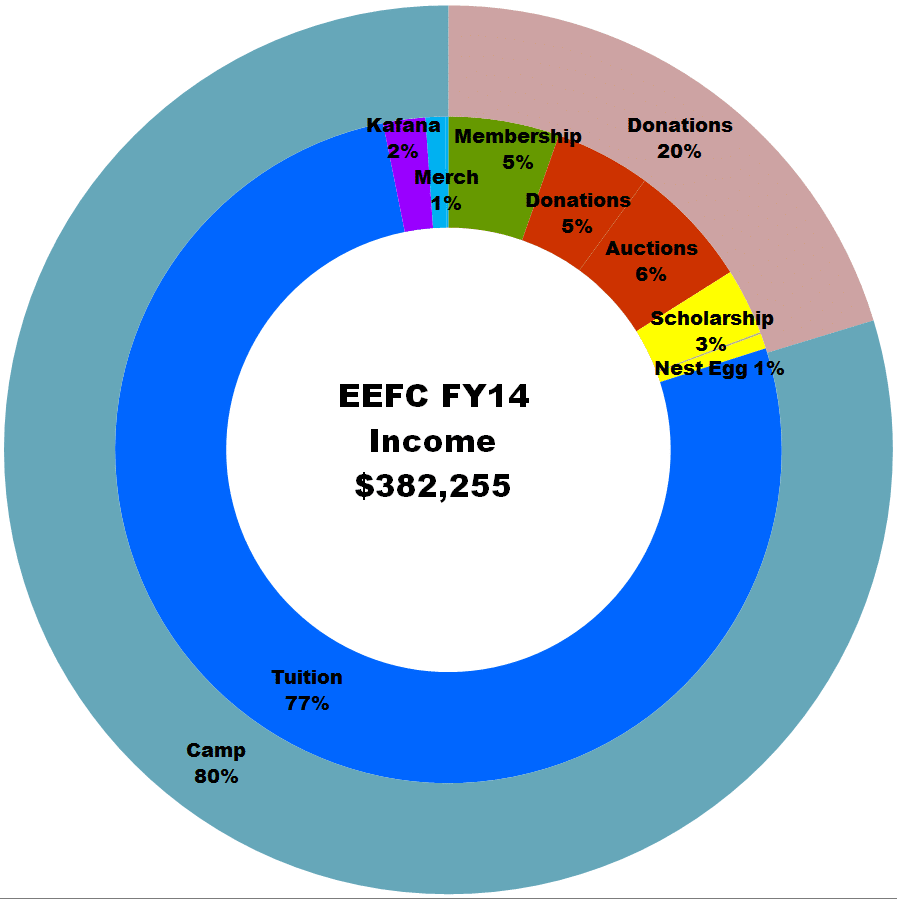 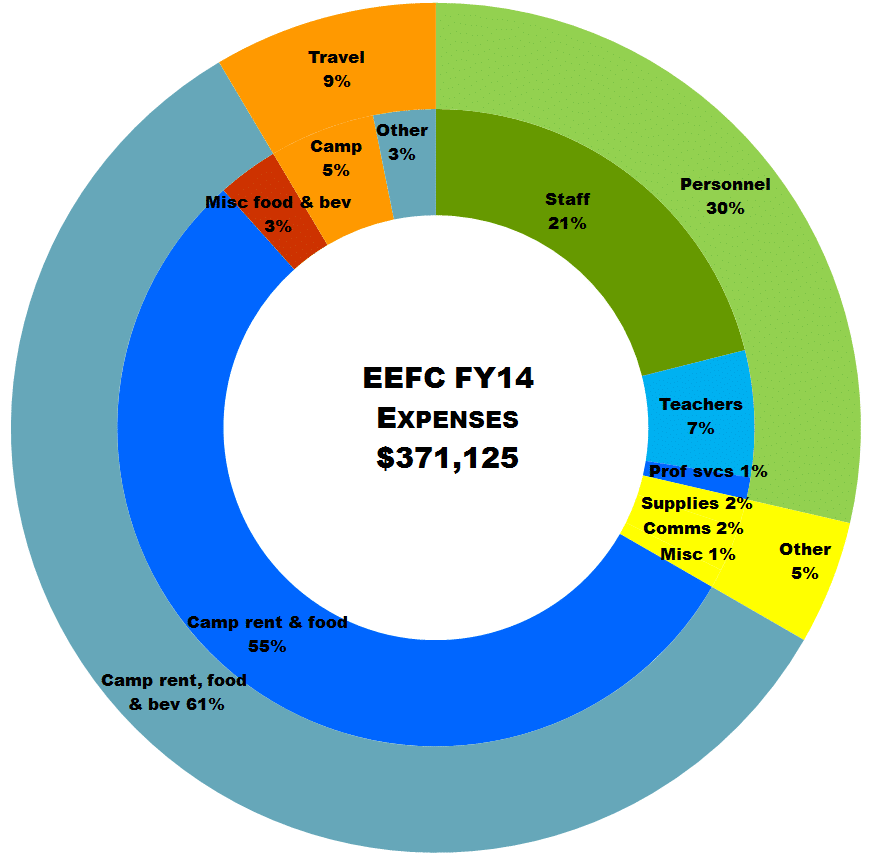 Prior year FY2010-2013 charts are available here: https://eefc.org/financials/. You may wish to print out charts to compare them side by side.  We realize that variations in categories and formatting make it harder to compare year to year. The changes in categories on these charts is largely a result of changes in the EEFC budgeting and accounting procedures. Questions or suggestions can be emailed to the board liaison at board@eefc.org.

Income chart – Scholarship and Nest Egg funds are restricted and technically accounted for as income in the year they are moved to the general fund (the year they are spent).  In this chart we include FY2014 contributions to these funds.

Expense chart – Work Exchange and Tuition Wavers are not expenses per se, they are included in Camp rent & food